Mumbai Indians (MI) is the most successful teams in the history of the Indian Premier League (IPL). The Mumbai based franchise has four IPL titles to its name so far. As their skipper, and birthday boy Rohit Sharma turns 33 today, let us see how Rohit led Mumbai to becoming the most successful IPL side.

For the the first time in 2010, MI came close to winning the title. However, they ended up losing the final to MS Dhoni led Chennai Super Kings (CSK). MI continued its good run in 2011 and 12. They made the play-offs both the seasons, however, failed the make the finals despite possessing a line-up filled with stars.

After waiting for five seasons, 2013 was the year for MI. Australian great Ricky Ponting took over the captaincy. However, he stepped down midway into the season. With Anil Kumble as the coach, Rohit Sharma was handed the captaincy. This was the first step towards a change in fortune for MI. In his very first game as skipper, Rohit led MI to a win against KKR. With the presence of greats like Anil Kumble, Ricky Ponting and Sachin Tendulkar, Rohit Sharma had the perfect opportunity to develop as a fine captain and he, did not disappoint.

In his very first season as captain, Rohit took MI to the final in 2013. To top it all, Mumbai was up against rivals CSK in the final. Kieron Pollard’s gutsy 32-ball 60 propelled Mumbai to a respectable total of 148 after a collapse.

Rohit then led his side tremendously well under pressure. As a result of fine captaincy, Mumbai successfully restricted Chennai to a mere 125 despite Dhoni’s heroics (45-ball 63). Mumbai therefore ended its draught, winning its maiden IPL title in 2013. This was an indicator of the dominance in the following years, by captain Rohit  and his men.

“It was a huge challenge for me. The moment the captaincy came to me, I was ready. I thank everyone who believed that I could do the job. Lifting the trophy is another thing but it was a learning curve for me and I really enjoyed it,” Rohit Sharma said after the IPL 2013 final.

The dream turnaround in 2015

The start of the 2015 season proved to be a disastrous one for Mumbai. Having lost 5 of their 6 opening games, the situation looked grim for MI. However, Rohit’s men managed to make the play-offs (4th place), thereby scripting a commendable comeback. That’s not all. It turned out to be a dream turnaround as Mumbai went on to win its second title, once again beating rivals CSK in the final.

This time around though, it was a one-sided affair. Courtesy a blistering 26-ball 50 from Rohit, leading from the front, and a quickfire 68 from Lendl Simmons, MI posted a massive total of 202. It proved to be too much for CSK, as they were bundled out for a 161. Where the first title ended the draught, the second one was a testimony of the dominance that was to prevail.

“We played like true champions. Mumbai Indians have shown great character. It was just a matter of putting everything on the field and I couldn’t have asked for anything better. It was important that we got some momentum, it didn’t happen at the start, but the turnaround was great,” Rohit Sharma said after the IPL 2015 victory.

It was for the first time in 2017, that Mumbai Indians became the most successful IPL side. This time, it was Rohit Sharma vs Steve Smith, Mumbai Indians vs Rising Pune Supergiants (RPSG) in the final.

Once again, it was a test of nerves for Mumbai, as they only managed to post 129 runs on a sluggish Hyderabad wicket. RPSG came close, but failed to cross the line, ending on 128. This meant that Mumbai clinched its third title in a last-over thriller by the smallest of margins ever, just a solitary run!.

While Malinga remained economical, it was Mitchell Johnson and Jasprit Bumrah who shared 5 wickets amongst themselves. It was thus, a combined bowling effort that led Mumbai to victory.

“This final will be special to us because of the way we fought,” Rohit Sharma said.

The Ultimate Battle for Supremacy 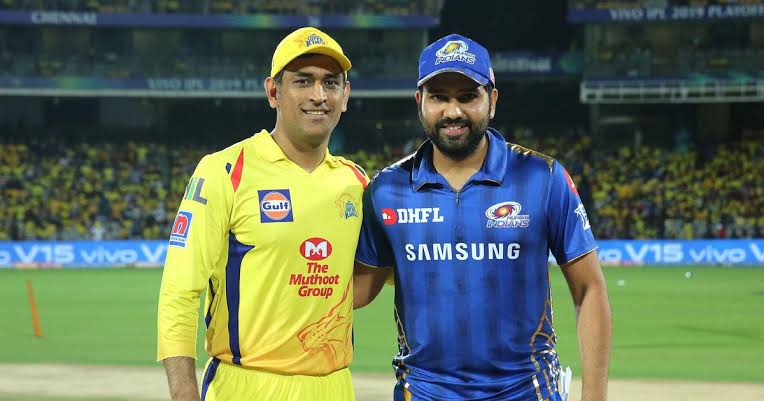 The 2019 IPL final was the ultimate battle for supremacy. An anticipated ‘blockbuster,’ the final lived up to the expectations. It was MS Dhoni locking horns with Rohit Sharma, as the two skippers faced off with a record fourth IPL title up for grabs.

Batting first, Mumbai could only manage a 148-run total on the board.

On the other hand, Faf du Plessis and Shane Watson guided CSK off to a good start. However, the Mumbai Indians picked up wickets at regular intervals to stay in the hunt. While Watson stood strong at one end, wickets continued to tumble on the other.

It went right down the wire, as CSK required 9 off the final over, with 5 wickets still at its disposal. Rohit Sharma threw the ball to Lasith Malinga. Interestingly, Malinga had conceded 42 runs off his previous 3 overs. The seasoned campaigner that he is, Malinga did not fail to deliver despite being expensive. With 2 runs required off the last ball, Malinga caught Shardul Thakur plumb in front, as CSK fell short by just 1 run!.

It was similar to the 2017 final, where Rohit Sharma and his men held their nerves to clinch last-ball thrillers.

The seed sown in 2013 by handing Rohit the captaincy bloomed into Mumbai’s turnaround towards a dream IPL journey.