Why would Mr. Rodgers even have any thoughts about leaving Leicester?

Yet another revolution is gathering momentum at rapid speed and Mr. Rodgers is now 12 points clear of Jose Mourinho’s Tottenham. They are in front of Premier League champions Manchester City and breathing down the necks of his former club Liverpool.

Leicester possesses a squad with some of the best young players in the country. A striker like Jamie Vardy who has scored in six consecutive games and a board who will back him with funds in January.Kelechi Iheanacho’s dramatic winner strike deep into added time, however was the moment of the match.

The foxes edged Everton by a score of 2-1 at the King Power Stadium last night with a dramatic script. The visitors took a deserving first half lead through Richarlison, but second half goals from Vardy and Iheanacho gave the Foxes their much need three points. There was some VAR drama, actually a lot of. The opening quarter hour wasn’t anything to write about.

Everton lined up with three at the back and defended in all numbers. They allowed the Foxes to knock the ball around but largely nullifying the threat. The Toffees attempted to break with pace a couple of times, but never really threatened Schmeichel’s goal. Leicester ended the first period with 70% of the possession and twice as many shots from the visitors. However, there was no appreciable menace in the Foxes’ attack. It was comfortably the worst half of football we had seen from Leicester in this season. 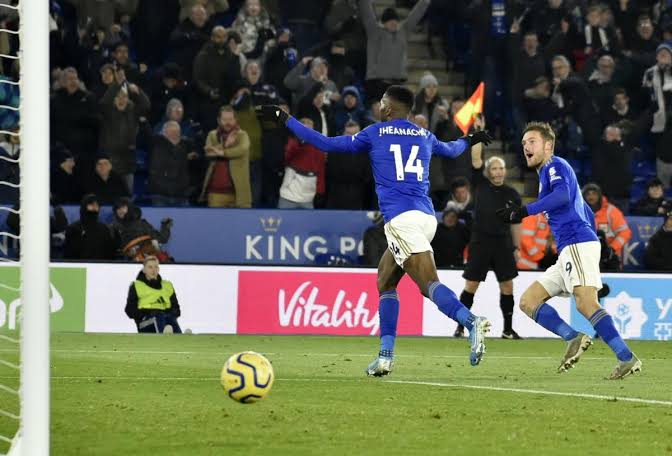 Rodgers stuck with his starting XI to welcome the second half. It was the visitors who started on the front foot though. Rodgers said earlier that Leicester need whole squad for to produce a successful season. And what better way to prove it than unlikely hero Kelechi Iheanacho stepping off the bench and clinching the game for his side. Leicester had a record-setting sixth straight Premier League win in dramatic
fashion.

When the Foxes were trailing to Richarlison’s first-half header, Rodgers introduced Iheanacho, which was his first league appearance of the season. The Nigerian had scored in his two cup appearances but had not seen the face of goal in the Premier League since September 2018. This was a somewhat desperate substitution by Mr. Rodgers. However, it proved super sub for the home side. Iheanacho was brilliant. He set up the first for Jamie Vardy after taking Wilfred Ndidi’s pass in his stride. And then he scored his own in the added time. Leicester came back from behind and secured their victory in the added time. This win will keep Leicester
2nd on the table with 32 points after 14 matches. They remain 8 points behind Liverpool and now 12 points clear of 5th-place Spurs.

Messi wins the Ballon d’Or for the sixth time

And again he conquered the stage and again he becomes the best. After having his sixth Bal…