Liverpool overpowered Manchester City with style and substance, opening an eight-point lead in the Premier League. Last season this fixture had refused to catch light despite the best efforts of everyone to fan the flames beforehand finishing goalless. 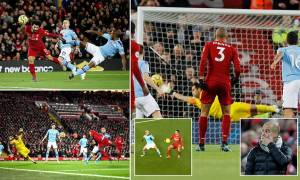 Fabinho’s 25-yard rocket rifled the Reds into a sixth-minute lead moments after the visitors were left fuming when they thought they should have got a penalty when ball bounced off Trent Alexander-Arnold’s arm.

Mohamed Salah doubled the lead in a pulsating start after a great move which started by both Liverpool fullbacks. Sadio Mane’s diving  header completed the ransacking in the second half as Liverpool’s hopes of ending 30 years of title pain earned a monumental boost despite Bernardo Silva’s 78th-minute strike gave sone late hope of a revival to visitors. “I think today we showed why we are the Champions, I’m so proud,” Pep told Sky sports.
Either way his side faced a monumental task to overhaul Liverpool, winners of 11 out of 12 league games this season.

“I’m not in a position to know the future, said Guardiola when asked about the title race. Now its the international break, hopefully they come back, hopefully people who are injured come back and then it’s Chelsea at home.”

His Liverpool counterpart Klopp acknowledged the strength of the opposition but was delighted to have cleared another hurdle in the quest for a long-awaited championship crown.

“They were good. Oh they were good and we had to defend with all we had but we scored incredible goals,” was his verdict to BBC Sport.

Not a Good Ebenin for the Arsenal fans

A statement in the title race:

After blowing a 7-point lead last season, Liverpool certainly have their guard up, even after extending their lead over City to nine points and the overall table lead to eight. But after their Champions League triumph and after the start they have enjoyed this season, there’s a different aura around this team and a genuine feeling that it’s Liverpool’s title to lose.

Is it finally Liverpool’s year?