Lille Olympique Sporting Club commonly called LOSC, also referred to as LOSC Lille, Lille OSC or simply Lille, is a French association football club based in Lille, France. Lille currently play in top tier of French Football -Ligue 1. They have won it 3 times so far, most recently during 2010-11 season.

The club was founded on September 1944 and recently celebrated their 75th anniversary. Following the arrival of Jose Mourinho at Tottenham, he has appointed Joao Sacramento as his assistant at Spurs. Goalkeeping coach Nuno Santos has also left Lille to moved to north London. These recent moves did not really go well with current boss Christophe Galtier. Well, now that we know about their foundation and touch based on some recent happenings, let’s figure out their logo.

What does Lille logo signify?

Well, for a start – Lille’s logo is shaped in the form of a Pentagon which is very different from a traditional badge of a Football club. Red and Navy Blue colours can be seen predominantly in the logo because Lille’s home kit colors. Lille are nicknamed as Les Dogues, translated to ‘The Great Danes’ which is a German breed of domestic dog known for its giant size. Remember Hagrid’s pet Fang? From the Harry Potter? That’s a Great Danes. Well, the animal you find in the logo, is very common in France. The Great Danes appear continuously since 1981 in the logo. The presence of a flame, which can be misinterpreted as the dog’s hair is kind of unnoticeable, but very neatly done, indicating the passion of its supporters.

The white colored symbol that can be seen in the logo if looked closely, is actually a flower. Fluer de Lys, translate to Lily Flower. The fleur-de-lis has appeared on countless European coats of arms and flags over the centuries, it is particularly associated with the French monarchy in a historical context and continues to appear in the arms of the King of Spain (from the French House of Bourbon), the Grand Duke of Luxembourg and members of the House of Bourbon. It remains unclear where the fleur-de-lis originated, though it has retained an association with French nobility. It is widely used in French city emblems and in the coat of arms of the city of Lille (pictured below). 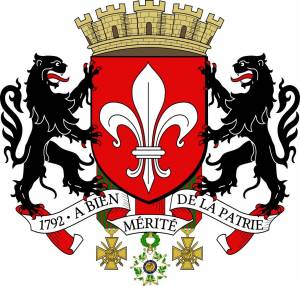 Beneath the flower, the word Lille disappears and only the abbreviation LOSC (Lille Olympique Sporting Club) remains in the new logo.

The club finished on 2nd position last year with departed star man Nicolas Pepe running the show. Lille travel to London next and face Chelsea in the last game of the Champions League Group Stage after already being eliminated from the contest.

Well, that’s all for now. Hope you guys enjoyed it. We will cover another club in our next logo watch series. Do keep an eye out. In the meantime, check out the previous versions here!